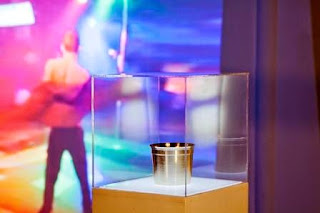 ElblocDeltoniGuida - Adam is co-founder of Preston is my Paris, an arts platform that has featured the work of Jamie Hawkesworth, Theo Simpson and Ben McLaughlin. It’s also an ongoing project in its own right, and at its heart is an affection for vernacular culture around northern England. Like Mass Observation, Chris Killip and Daniel Meadows have done previously, the contributors use their own experiences rather than an adopted nostalgia to inform their work. “Part of Jamie’s initial appeal was that he turned up in London with a documentary portfolio from somewhere no-one had ever heard of,” says Adam. “It was clearly an advantage that he had developed his understanding somewhere different.”

Adam was born in Loughborough but went to university in Preston and has settled in Manchester. “I’ve got a studio here. I’ve never had a studio before but I’ve just got a little space in Salford.” There was a brief stint in London, too, but “it really wasn’t my place”, he says. It was in Preston that he met Robert Parkinson and, in 2009, the pair started Preston is my Paris. At the time, they never intended it to go further than a couple of zines. “We nicked the name from a Clarks’ shoes advert. It summed up everything the project was about.” Their work is now held in the Tate Library, the Fotomuseum Winterthur, Manchester Metropolitan and London College of Communication.

The first set of zines came out just as self-publishing was gathering momentum. They were handed out for free in Preston city centre in an attempt to spark some sort of engagement with the local area. Preston had recently gained city status – winning it in the a contest at the 2002 Golden Jubilee – but lacked the cultural presence or activity you’d expect from a city, and sadly still does. In a way, the label hasn’t done it any favours, putting it in league with neighbouring Manchester and Liverpool who it could never feasibly compete with. Nearby Blackpool and Wigan, still mere towns, muscle in with their own potent cultural identities. (riaucitizen)

Always better to be hard, Oscar Godfrey & Adam Murray, Caustic Coastal, 2015 4.5 5 Unknown Wednesday, May 20, 2015 ElblocDeltoniGuida - Adam is co-founder of Preston is my Paris, an arts platform that has featured the work of Jamie Hawkesworth, Theo S...