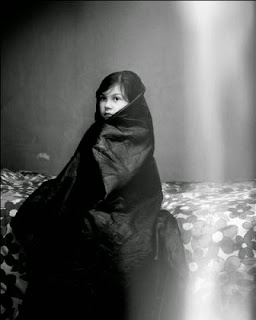 ElblocDeltoniGuida - For me, this work is reminiscent of themes seen in literature and folkloric storytelling. I’m interested to hear if this was something you were initially inspired by and what other mediums or artists you were looking at when making this work?

The themes and ideas Pine Tree Ballads explores are derived from a variety of sources of inspiration. I borrow from and am influenced greatly by literature and poetry, Buddhism, Voodoo and Catholicism; Nordic, Greek, Native American and Spanish mythology; eastern woodblock prints/scrolls, Northeast American painters, and Japanese photographers; fantasy novels and video games, and, most importantly, the childhood imaginings of my daughter.

I believe family identity and the character of a specific landscape, a sense of place, is influenced by a wide variety of folkloric, cultural, literary, and personal influences. My goal is to constantly play these off each other and complicate Pine Tree Ballads as a photographic sequence that inspires a reader to decode the “text” multiple times through multiple readings.

Throwing out names influencing the series is a fun exercise but an almost endless task: