There is Aso a Lot of Technical Experimentation 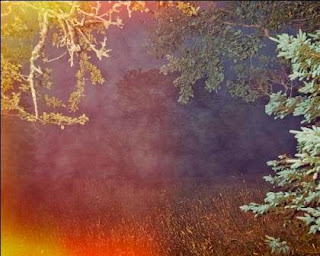 ElblocDeltoniGuida - There is also a lot of technical experimentation and different styles of photography present in Pine Tree Ballads. Why is it important for you to mix more traditional styles of the medium alongside the more unique processes seen in the series?

The first edit of Pine Tree Ballads happened about 5 years ago and looked nothing like it does today. Most of the images were straight documentary inspired by photographers exploring family, such as Jessica Todd Harper, Doug Dubois, and Sally Mann. I was looking to document the everyday relations, but mixed with a cinematic and painterly quality of light, a common trope modern day romanticism we all know too well. At some point, I realised that in addition to these images I had all these amazing, formally complex, “bad exposures/scans” in a variety of different formats captured both digitally and on film that just did not fit stylistically. The images looked unique so I was curious if I could make something out of them that celebrated their flaws as an attempt to redefine “straight photography.”

At this point in my life, I was growing mentally exhausted and artistically numbed by the perfect negative/print, large format photo worshiping I had always felt pressure to achieve from the generation of professors that taught me. They seemed of a different era that was equating mastery to technical and chemical consistency and control that removed any indication of the photographic process. It took photography so long to conquer the chemical and technical struggle to achieve high-fidelity photographic representation that many practitioners censored what I find to be the material profundity of the medium. It is liberating to allow the medium to simultaneously adopt the utopic, immersion of large format image fidelity supported in traditional “straight photography’” while also aesthetically and formally appreciating evidence of photographic processes.

The straight aesthetic made Pine Tree Ballads seem flat and generic so I decided to interject a dream sequence into the series that would adopt what I like to call the “aura aesthetic.” The images would celebrate the scratched, touched, rubbed, and overexposed as a gateway into a “document” dream world that would unbalance the straight aesthetic by highlighting photography’s material essence. The idea and power of “aura” is obviously something I derived from Walter Benjamin, who states that aura is an object’s “presence in time and space, its unique existence at the place where it happens to be” and “…a strange weave of space and time: the unique appearance or semblance of distance, no matter how close it may be.” The photographs in our family albums have this sense of aura. One can detect generational history of contemplation and preservation that adds emotional weight to the ritual of looking, basically empowering the photographs as unique objects in the flow of time and culture.

The images that make up the latest version of Pine Tree Ballads I feel have a similar sense of aura. There is a crisis of the photograph being presented both as an object looked at, transported, stored, and destroyed while at the same time there is the narrative and/or cultural significance of the subject of the photographic event and sequencing existing in the past as well as the present. Is it real or reproduced? What was this then and what is it now? Am I looking at history or a story for the present, or both? Is the main subject of the work, the photographic object or the often obscured photographic representation? Before I knew it, the “aura aesthetic” of the dream sequence experiment dominated my creative thinking so I abandoned the original “straight photography” aesthetic and the Pine Tree Ballads of today was born.

Adopting the “aura aesthetic” really changed my editing and shooting process. I look to all of my image archive regardless of its origin or state of preservation and find amazing images that would have otherwise been ignored. I have become obsessed with photographic material disruptions, such as poor development, lens distortion, loss of color, grain coarseness, mold, and the multitude of ways paper stains, rips, and deteriorates over time. To this day, it is difficult for me to remember how images were originally captured and whether or not the flaws of the image are “real” or simulated with software and scans. It does not matter to me as long as the physical prints are firmly entrenched in the material possibilities and limits of analogue photography. I want to create an authentic sense of aura which differentiates itself from trendy insta-art nostalgia fueled by Instagram filters and smart phone apps. I believe the analogue essence and “aura” sensibility of Pine Tree Ballads is directly related to years of looking at those well loved family albums.

My investigation into aura has become a peeling onion of sorts that has really caught my attention in regards to artistic possibility. Recently, I have actually been physically cracking the glass on the frames of my prints. This brings a whole new haptic auratic event to the printed works as the ragged, 3 dimensional cracks challenge the metaphysical nature of the 2-dimensional, flattened, analogue negative marks of exposure and surface deterioration.

For me, this work is reminiscent of themes seen in literature and folkloric storytelling. I’m interested to hear if this was something you were initially inspired by and what other mediums or artists you were looking at when making this work?

The themes and ideas Pine Tree Ballads explores are derived from a variety of sources of inspiration. I borrow from and am influenced greatly by literature and poetry, Buddhism, Voodoo and Catholicism; Nordic, Greek, Native American and Spanish mythology; eastern woodblock prints/scrolls, Northeast American painters, and Japanese photographers; fantasy novels and video games, and, most importantly, the childhood imaginings of my daughter.

I believe family identity and the character of a specific landscape, a sense of place, is influenced by a wide variety of folkloric, cultural, literary, and personal influences. My goal is to constantly play these off each other and complicate Pine Tree Ballads as a photographic sequence that inspires a reader to decode the “text” multiple times through multiple readings.

Throwing out names influencing the series is a fun exercise but an almost endless task: