The Stories have Influenced this Series Immensely 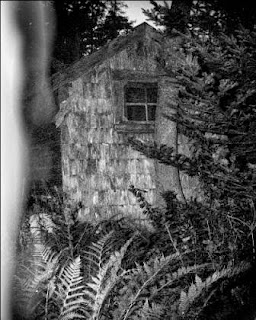 ElblocDeltoniGuida - In our past conversations you spoke on how specific stories about your great-grandfather’s settlement to coastal Maine seemed larger than life…. almost as if the stories were centuries-old fables. I’m curious to know how your perception of these stories shaped this work and if you could elaborate on how and why folklore became an important component to constructing this series?

The stories have influenced this series immensely because they made the farm seem animated, ancient, and inhabited by ancestral souls. For example, there was an old, built-in, white-washed birch wood ladder that accessed a storage attic above the mud room that was so weathered that the wood literally looked like scratches on a negative. I say “was” because the farmhouse was renovated in 2014 which is a new era for Pine Tree Ballads that will be addressed in the future. Anyway, it was a rickety old ladder that always made one extremely nervous when you climbed up it to get clamming gear or a life vest. Antique hand-painted signs and scribbled notes were nailed all over it warning of potential disaster if you missed your step. It was a generational timeline of cautionary script that charged the present moment with history and an intense sense of self-awareness.

My grandfather often anecdotally described how Captain Hutchins froze to death at the bottom of this ladder one winter when he accidentally fell and broke his leg. He was a retired cook that served on whaling ships and supposedly had a wooden leg from a boating accident. He lived in the farmhouse alone for years before my great grandfather took ownership of the property. As a kid, grandfather heard Captain Hutchins tell many a story in which the old sailor always single-handedly saved a whaling expedition from a disastrous ending.

As you can imagine, the thought of Captain Hutchins freezing to death with one broken leg and one wooden leg in a room with an ominous ladder that you use everyday does make the imagination run wild. At night, I often think I can hear his wood leg dragging on the worn floors of the mudroom or imagine the howling wind as his enduring last breath of life. I am never scared, but always feel a connection and maybe a bit of warning that the place we call a summer home has an epic and rugged history. It is important to point out that fear or sense of haunting is not something I generally associate with the landscape or the mood of Pine Tree Ballads but rather a general sense of uncanny wonderment that inspires stories, ballads, and poetry. Coincidentally, the first image I ever made that I considered a fine-art print was of this peculiar staircase. The image was very Walker Evanesque but if I could photograph the space now it would be an entirely different style that would vibe with the unsettling wonder of the occurrence described in the story. I would treat the staircase and mudroom more as relic than reality.

Folklore is in essence the tradition of history shared amongst a region, tribe, or in my case a family. The history and identity of a family thrives on stories of the past, an awareness of sharing knowledge, and the privilege of participating and contributing to a mythology interweaving past and present. I see the orchard farm, the shore, the pine trees, the granite, the muck, the gusting winds as natural elements and the symbolic essence of my family narrative. To understand the family, you need to know the folklore, the tradition, the story of a photographic moment in the context of a particular shared history of looking rather than attempting an unbiased, neutral examination of a document depicting a subject in a moment in time.

When you sit with a family album or experience an old fashioned slideshow, you anticipate an active dialogue that provides context for the images. In the digital era, this type of testimonial experience is diminishing in favour of a steady production stream of capture, transmission, and quick “thumbs up/ heart/like” reception encouraged in mobile phone cameras, apps and social media platforms. I am doubtful that modern day families revisit snapshots and ceremonial pics on iPhones, digital image archives, etc. in any comparable fashion to the intimate bonding and identity building rituals of looking, formalised presentation, communal spectatorship, and collective story invention shared amongst generations during the analogue era of family albums and/or slide projector shows. Maybe it is too early to tell or pass judgment, and someday my great-grandchildren will look to a new media for family engagement of a digital image/texting archive. (riaucitizen.com)
The Stories have Influenced this Series Immensely 4.5 5 Unknown Wednesday, May 20, 2015 ElblocDeltoniGuida - In our past conversations you spoke on how specific stories about your great-grandfather’s settlement to coastal Mai...