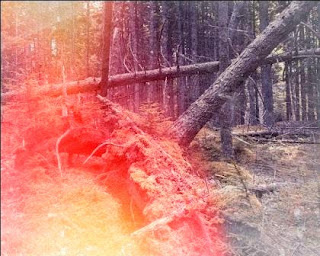 ElblocDeltoniGuida - Pine Tree Ballads seems to be a departure from your past projects. This series is dedicated to composing a visual narrative that is very much rooted in storytelling and magic-realism. How did you become engaged in working this way and how has it changed your image-making process?

I am not sure this is completely accurate as a few other of my past series have definitely engaged narrative and storytelling. I think it gets kinda of confusing because I actually have a lot of work that looks quite different and explores a variety of styles and genre in photography. I think Pine Tree Ballads raises the bar in the complexity of the storytelling and is much more developed in regards to implying a subtext for a viewer to discover. The titles of the series are a good example of my proclivity to complicate the narrative structuring of the sequence in hopes of challenging typical conventions of narrative, character, and plot.

Most of the time, a viewer engaging a photographic sequence for the first time within a book, on a gallery wall, or website pays little to no attention to the titles of each image. Titles are often disregarded as a secondary element in photography that only serves the purpose of stating conditional fact, identification, and/or exposing romantic notions of subject. Classic photographers have typically been quite dismissing of text often claiming that if the image does not say what you want then it has failed. For Pine Tree Ballads, I consciously put effort into having titles that produce a subtext of relations between the imagery and the personal, literary, philosophical and historical sources that inspired their creation. This intentionality makes the images and the text quite dependent on each other narratively in a way that the image could never quite do so on its own. The titles encourage a second reading that often provides a new conceptual framework to give the image a new narrative foundation.

For example, the title Cervantes’ Shadow provides the subject of the image wearing a bucket on his head an association with the author of the novel, Don Quixote. The novel has a psychologically complex protagonist, Alonso Quixano, that can be simply described as a well-read, rational, middle-aged, chivalrous madman. Cervantes’ Shadow’s association with Don Quixote moves the portrayal of the lone, armed figure in the woods away from the classic horror characterization found in a protagonist like Jason from the Friday the 13th movie franchise or a backwoods hillbilly character from James Dickey’s novel Deliverance. I think this is important because a viewer might simply fall prey to a horror association which would be a gross oversimplification of the narrative intent of the image within the sequence. The character and the scene are a hybrid of horror, heroism, play, and delusion. The title enables the reader to become aware of the slippery, ambiguous intention of the characterization of the scene which oscillates between reality and fantasy, buffoonery and threat.

The image title, Shack of Ryhope Wood, is a literary reference to Mythago Wood by author Robert Holdstock, a 1984 bestselling fantasy novel I read as a teenager. In the novel, Ryhope Wood is an ancient forest, a parallel universe that has a slower rate of time than the outside world and is inhabited by animals, monsters, and humans generated from the memories and myths within the subconscious of nearby humans. This title encourages the reader upon discovery of the literary source to reimagine the shack in the woods as a mysterious place in space and time that is psychically charged within by those outside of it. The title is intended to complicate the image by unconventionally attaching associated narratives to it. One has to read the image as part of a much larger sequence of plots and ideas than purely images.

Does a viewer actually get all of this from the image titles? I am not sure, but I feel I have planted the seeds that can lead to some interesting associations and relations. This is really all I can take responsibility for as the author of the work…there is a logic to the structure of the “text” that undermines a single reading. Pine Tree Ballads has changed my artistic goals in that what is important to me in a work now consists of two equal interests —materiality and literary complexity. I feel I am as much an author as I am an artist. This series is a narrative driven, photographic and textually inspired work that serves as a docu-literary interpretation of my family identity in relation to a specific landscape in Maine, a collection of photo albums and oral histories, physical landmarks, and cultural influences. (riaucitizen.com)
Pine Tree Ballads seems to be a Departure from your Past Projects 4.5 5 Unknown Thursday, May 21, 2015 ElblocDeltoniGuida - Pine Tree Ballads seems to be a departure from your past projects. This series is dedicated to composing a visual n...