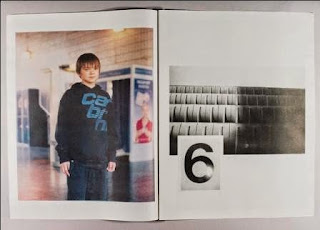 ElblocDeltoniGuida - At the time of talking, Adam’s writing about subculture in a piece for an Australian magazine. “Inevitably,” says Adam, “if people grow up in regional systems and then drift off to London when they’re eighteen or after uni or whatever, their only notion of their hometowns is going to be nostalgic. There aren’t many opportunities for a northern correspondent or editor, fully engaged with that culture. Do you know what I mean?” It’s not the exodus of young artists he’s criticising but the reliance on London for money. The childhood nostalgia it perpetuates, combined with the retrospective nature of fashion, explains why we get stuck in these uninspiring loops. Fifty years on, we’re still clinging onto Skinhead culture, perhaps because we don’t believe in the value of our own desires, problems or experiences. “I’m fascinated by this obsession with subculture existing. We don’t live in that world anymore. I have never, ever experienced mass subculture in any form. You see people looking like they do, like punks, but that myth of Britain being taken over by these youth groups is completely alien to me.”

He refers to Oliver Sieber’s Imaginary club. Visually, it follows the conventions of a traditional subculture book but as the title makes clear, Oliver’s not sold on the idea of subcultural tidal waves either. “It’s all imagination, I suppose,” Adam goes. “None of it exists. We only ever experience it through imagery. We’re obsessed with these archives and relics. Why don’t we don’t just engage with how things are and appreciate the world for what it is? I’m not interested from a point of criticism, but more as an observation of what is happening. In thirty years, when we’re looking back on it, what will the cultural documents of the past be saying about northern England?”

For Adam, it’s crucial that someone represent the reality of the present and everyday rather than solely glamourised versions. In February, he and Oscar Godfrey presented Always Better to be Hard at the Caustic Coastal in Manchester, a mixed-media exhibition examining how value and taste are informed. “Hopefully it wasn’t taking the piss out of anything as it certainly didn’t intend to. It was more about the audience thinking about their reaction to it and where that came from.” Hung behind a gold-plated Jagerbomb cup was a wall-mounted canvas with a gaudy market-stall fabric stretched over it, pink fur and animal print. Nothing subtle about that. Next to it was a black-and-white image of a man’s back, built like a brick shithouse. “That was from New Years’ Eve at Bowlers. It’s a warehouse thing on the outskirts of Manchester which has been going for decades, at least the last thirty years. People are really committed to it. They sell out, the tickets. I think there were seven thousand tickets sold for New Years’ Eve. One room was playing hardcore gabba and one was playing garage. They had So Solid in the other. It was amazing.”

His new zine, The North West, carries on where the original zines left off but incorporates material from Liverpool, Manchester, and plenty of other places in the locality. Like their name, the cover’s a knock-off – this time, of The North Face logo. “Yeah, that was nicked as well. We don’t really think of anything original ourselves.” Inside, there are no sullen-faced steelworkers or Hovis delivery boys. There are no orange girls without coats on throwing up on bouncers’ shoes. There are no kids in tracksuits sitting on estate walls giving the finger. And there’s no Bez, ‘good old Bez’. Thank god. It’s a blinder. (riaucitizen.com)

Preston Bus Station, Jamie Hawkesworth, Adam Murray & Robert Parkinson, 2010 4.5 5 Unknown Wednesday, May 20, 2015 ElblocDeltoniGuida - At the time of talking, Adam’s writing about subculture in a piece for an Australian magazine. “Inevitably,” says A...