Using the Dense Backwoods of Costal Maine as a Backdrop, Ode to Irving 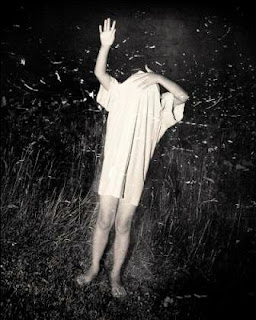 ElblocDeltoniGuida - Using the dense backwoods of costal Maine as a backdrop, Paul Thulin takes us on a journey that unfolds the secret layers of his own family history and personal identity. His series Pine Tree Ballads reads as a poetic vision, weaving together historical record and interpretive imagery that are inspired by a century of past-down stories and ominous childhood memories.

Because of its resemblance to his homeland of Sweden the artist’s great-grandfather settled on the North Atlantic coastline. In this landscape the family clan embraced their past, as well as their evolving present and established their own story through myth and imagination. As the artist states, ‘In this place, stories have arisen from the mouths of both the young and old that over time have become the essence of my family’s identity.’ And it is here, in this work that we are given a haunting glimpse into the shared history and dream-like world created not only by the artist, but also by his ancestral traditions.

Antone Dolezal: Your series Pine Tree Ballads is a journey into family history, cultural identity and childhood memory. Would you expand upon how you came to begin this project and how it developed over the years?

Paul Thulin: Originally, I was simply shooting all of the time with all kinds of cameras, film, etc. during the summer months with my family on a farm off the coast of Maine. I was following the footsteps of my grandfather who took lots of images of the family for homemade photo albums documenting not only leisure, but more often than not, the labor of every summer. Those photo albums are kept in an old clamming basket in a closet at the farmhouse and date back to 1917. As a kid, I would obsessively look them over and memorized each album to a point that they became an inherited and unquestioned narrative in my mind regarding the people, landmarks, and events that took place before I was born. Family photo albums are spiritual objects especially when they present the history of a particular family in a very specify landscape. The images in the photo albums are worn from viewing with scribbled captions that vary in clarity depending on the year and my grandfather’s declining penmanship. Over the years many family members and visitors have looked at these albums, touching the photographs, and telling stories.

The albums materially consist of B/W prints spanning several decades to post 70’s color images including all types of photo paper from exotic early Kodak papers to 1-hour lab varieties. In some albums, a few anomalous images and formats (e.g SX 70 Polaroids) stand out: obvious ‘guest’ images sent from family friends that had visited during the summer. The albums are records of family, but are also an archive of the physical character of vernacular photography from 1913 -1991. My memory of the farm is heavily influenced by the evolution of the materiality of photographs themselves. Marshall McCluhan might say “The medium is my memory is my message.” Joking, but my point is that photography has a very powerful relationship with the nature of one’s immediate perception and memory. My experiences and memories of family, farm, and landscape is an amalgamation of the photographic representations in my grandfather’s photo archive, my personal production of Pine Tree Ballads, and an unmediated engagement of the events and actions of the everyday. This blending of impressions and filtering of life restructures the real in such a way that it is no longer, as Jean Mitry, French film theorist, states “objective and immediate.”

Roland Barthes’ thoughts about the nature of photography have me thinking about one’s sense of place being established by the coexistence of images and actual. What once was, still is and simultaneously is not, and will be until the image or the actual erodes from time or we stop looking and/or engaging. Confusing but I think this is the premise for the story of history. My experience of the farm is wrapped in an immense sense of aura that surrounds the worn, treasured photos, but is also sensed from personally exploring the landscape that was and is the subject matter of the images…enduring but evolving. The rocks, trees, roads, sheds, and tools experienced in the present day stand as relics and landmarks of prior generations but also exist as props for a continuous family reality. In a way, the images gave me a sense of “place”  that was sacred and filled with nostalgia far before I had truly physically and emotionally interacted with the land on my own. My family’s identity is a living memory echoing and transforming the fixed past of the photo albums with the perpetual slip of the present becoming the unfixed past, life unfolding, or, in some cases, my fixed images.

To answer your question more directly and honestly, I was simply documenting mundane events and one day I awoke and decided I was working on a sequence named Pine Tree Ballads. I do remember that at some point I came to the realization that images of family become deeply profound and meaningful as time passes. Up until that realization, I never thought family should be the source of one’s artistic practice, because it seemed to be too available to be serious subject matter; however, I considered my images as a unique family story intended to be authored for the looking/reading of future generations. Pine Tree Ballads is my folktale, my emotional, spiritual, rational, and experimental “documentation” of family, place, and time; it is my version of the truth. (riaucitizen.com)
Using the Dense Backwoods of Costal Maine as a Backdrop, Ode to Irving 4.5 5 Unknown Wednesday, May 20, 2015 ElblocDeltoniGuida - Using the dense backwoods of costal Maine as a backdrop, Paul Thulin takes us on a journey that unfolds the secret ...